A special project for marble handling 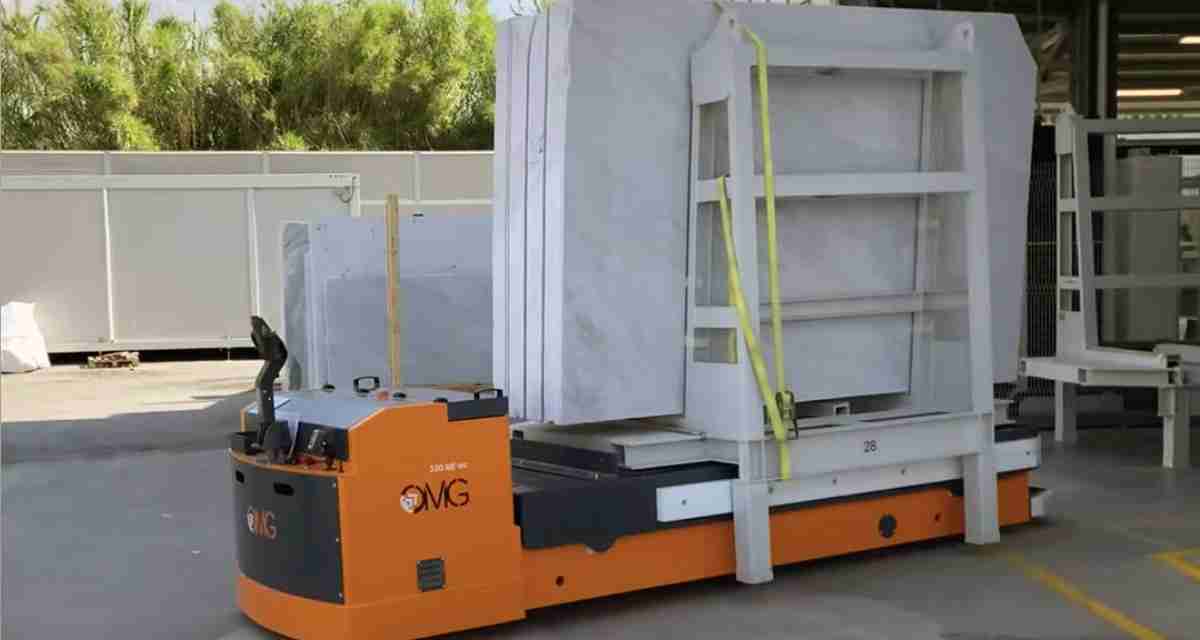 Moving marble slabs more efficiently and safely: this was the aim of the project that saw S.T. Segagione e Trasporti and OMG Industry jointly develop a special dedicated radio-controlled machine.

Some sectors such as marble and natural stone require handling heavy and valuable loads without sacrificing the safety of people and goods. This is a compromise that S.T. Segagione e Trasporti is well aware of and which formed the basis of the project that revolutionised the in-house storage and handling system. Beginning first with the development of a new industrial plant that led to a renewal of the production fleet, the project continued with the creation of a special radio-controlled electric platform, designed together with OMG Industry, a specialist in the production of customised electric forklifts for many years. “Our company’s need was to find a solution that would limit the internal movement of goods, in the various processes and departments, as an alternative to traditional lifting systems such as cranes, self-propelled trucks and overhead cranes.” – explains Gabriele Piccini, owner of S.T. Segagione e Trasporti – “The movements from one machine or shed to another previously took place in individual packs of ten plates and with repeated movements that continuously required the material to be slinged, lifted and transported.”

Watch the video of the special marble platform

The need then arose to find a more practical and safer system that would avoid continuous stress on the product and risk damaging it. “So we contacted a special machine manufacturer,” continues Gabriele Piccini, “who could produce a totally customised machine based on our needs. A manufacturer such as OMG Industry that could respond to the current needs of our production system but at the same time, at a more advanced stage of the project, could create more advanced machines such as the AGV machines, two models of which are currently under construction.”

The fruit of this collaboration was the development of a special pallet truck equipped with a lifting platform, which among its peculiarities has that of being able to be remotely guided via a radio control. A solution that, on the one hand, keeps the operator away from the load, preventing him from being crushed in the event of an accident, and on the other hand, guarantees control of the load during manoeuvres, ensuring that it is not damaged by bumping into third parties.

“Thanks to the OMG electric platform, we are now able to handle up to fifty marble slabs at the same time,” Gabriele Piccini continues. – continues Gabriele Piccini – “Previously, each individual parcel was lifted and moved about ten times before it was ready for final dispatch. Now we have gone from ten movements to just one. Once the packs of plates are deposited on the mobile structures, which are handled by the electric pallet truck, they are no longer touched by moving from one process and machine to another.”

A real revolution in the internal storage and handling system, which has led S.T. Segagione e Trasporti to start the process of replacing the fixed structures on the ground, handled with overhead cranes, with these mobile structures that adapt to the new machine used. The result is not only advantages in terms of safety, but also advantages in terms of cost reduction, both in terms of energy and operation. Unlike the overhead crane, which requires specialised personnel to operate it, the operation of electric platforms is much easier and within everyone’s reach. “The operators have welcomed the introduction of this tool very well, despite the fact that the sector is somewhat reluctant to change,” Piccini concludes. – concludes Piccini – “Moreover, this is only the first step of a larger project. The real benefits will be felt later when the new machines become fully operational and new solutions such as electrically driven pallet trucks are introduced.”