A single special platform for different types of handling 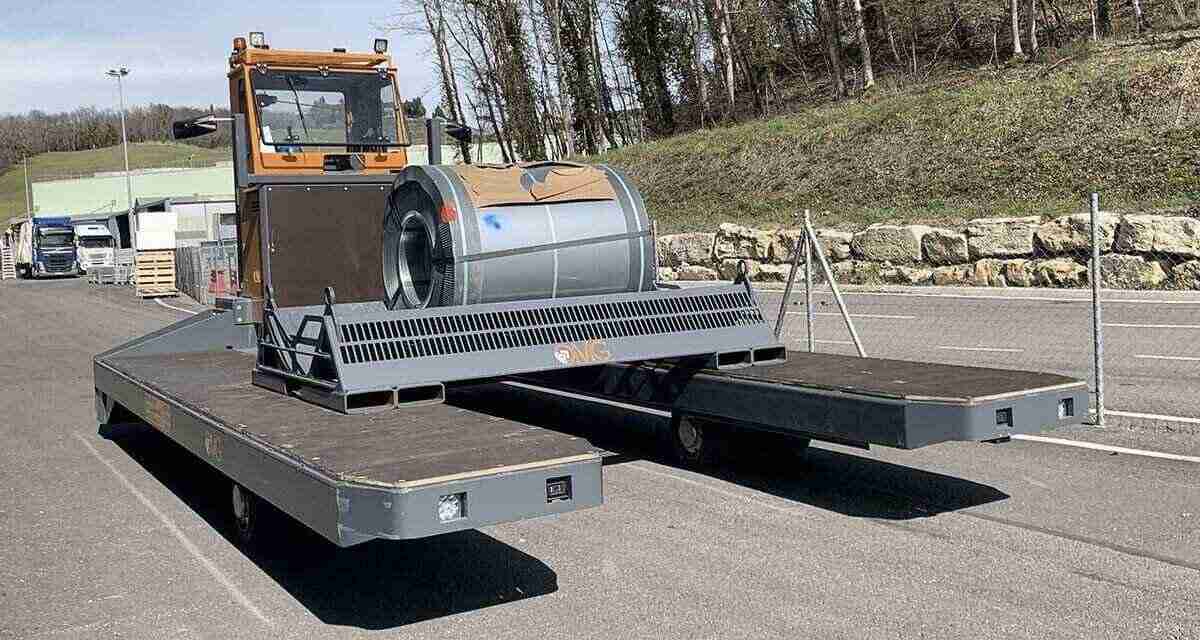 Moving rockwool pallets and steel reels quickly and safely with a single machine: this was the aim of the project that saw Pan Urania and OMG Industry jointly develop a special dedicated platform.

For many industrial companies, the handling of goods within their plants represents a daily challenge that has a direct impact on the efficiency of the entire production structure. A challenge that, to be met, sometimes requires the use of tools and machines that have been designed on the basis of the company’s real needs. Projects conducted by handling experts who, starting from the analysis of variables such as the type of load and the route to be taken, arrive at identifying the most suitable means of construction. A situation with which Pan Urania, a leading European company in the production of thermo-acoustic and sound-absorbing panels, was recently confronted and which involved its own production plant located on the Tuscan hills in Barberino Val d’Elsa. “The project arose from the need to find a solution that would limit the internal movement of goods, reducing handling time and the use of diesel-powered front forklifts,” – explains Fabio Mustone, Pan Urania’s production manager – “All this considering that the transport of goods is made more difficult by the presence, inside the factory, of two climbs with a gradient of 17% and 7%.”

Watch the video of the special platform made for Pan Urania

But why not use the standard forklifts that the company already had? “Pan Urania has a fleet of nineteen forklifts that are constantly moving around the production site with considerable costs in terms of ordinary and extraordinary maintenance as well as diesel fuel,” continues Fabio Mustone. – continues Fabio Mustone – “Adding more such vehicles would have meant increasing costs even more as well as internal traffic with safety risks for the operators.” It was from this consideration that the need arose to find a special machine that could quickly and safely handle both pallets of rock wool, a light but bulky load, and steel reels, smaller in size but very heavy.

“Since we could not find any existing machines on the market that could be adapted to our needs, we set out to find a potential partner who could design special machines tailored to our needs,” explains Mustone. – explains Mustone – “The search led us to OMG who immediately showed proactivity towards our project, as well as competence and speed in solving the problems we faced. All the technical staff were up to the task of understanding the requirements, assessing them, making inspections and developing the machine.”

The fruit of this synergy was the development of a special twin-engine platform with a rated load capacity of 10 tonnes. A machine equipped with a heated weatherproof metal cab with electrically operated power steering. Equipped with a steel frame with 2600 mm long manual blocks, the truck is capable of loading two reels simultaneously. It is also equipped with 4 loading wheels and 2 cushion rubber drive wheels as well as an automatic deceleration system. “The intensive use of this machine will allow us to cut costs considerably, reducing diesel consumption and taking advantage of the photovoltaic system with which we are equipped and which will guarantee the possibility of recharging the electric batteries at zero cost.” – continues Fabio Mustone – “In addition, thanks to the new OMG platform, with a single movement we can handle up to four pallets at the same time, whereas before with the frontal units we could only move one at a time. Not to mention the advantage in terms of safety due to the reduction in traffic between the production units.”

A real revolution which, like all changes, was initially met with mistrust by operators. “A diffidence that then turned into curiosity and finally into complete acceptance when they were able to see the real advantages through use,” concludes Mustone. – concludes Mustone – “They understood the project, gradually showing a growing interest even in the driving of the vehicle, leading as many as four operators to use it.”